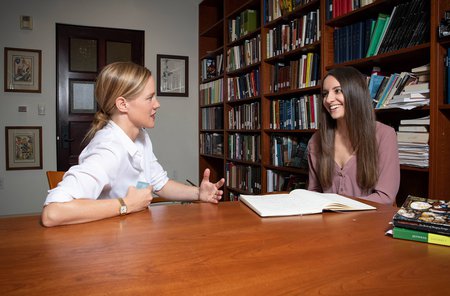 Every summer, labs across campus and at JPL host undergraduates eager to hone their research skills. One such avenue for growth is the 10-week program known as SURF (Summer Undergraduate Research Fellowships). Though most SURF students are future scientists and engineers, opportunities also arise in the humanities.

It was just such an opportunity, proposed by Caltech English professor Jennifer Jahner, that Amy Windham became aware of through one of her professors at Pasadena City College. Windham, who will transfer from PCC this fall to California State University, Northridge, plans to pursue a BA in English literature, followed by a master's degree in library and information science. Her goal is to become a research librarian.

Windham's SURF project is twofold. For her own research focus, Windham is exploring The Book of Margery Kempe, which is considered the first autobiography in the English language. The fascinating part, says Windham, is that it was written by a woman who lacked formal training in reading or writing. Kempe, a mystic and pilgrim who lived at the turn of the 15th century, dictated her story to two scribes. Windham is intrigued by what the work reveals about both female literacy and how books developed in medieval times.

As well as delving into the manuscript, both in its original Middle English and in translated versions, Windham has been familiarizing herself with Kempe's influences, reading texts by fellow mystics St. Bridget of Sweden, Julian of Norwich, and others whose works Kempe had read to her.

Windham, whose prior knowledge of Middle English was limited to memorizing the first 18 lines of "The General Prologue"to The Canterbury Tales, worked with Jahner on both comprehension and pronunciation. Although it is a historical language, Middle English is "sort of like taking modern English and running it through a funhouse mirror," says Jahner. "With some practice and a flexible ear and eye, you can start to read it."

Windham has been studying the one surviving manuscript of the book (which was not discovered until the 20th century) online through the British Library. She is interested not only in the text but also the annotations and notes in the margins that give her valuable insight into how contemporary audiences interacted with the work.

Part of Windham's time this summer has also been spent helping Jahner catalog and document early medieval experiments. "They're not what we would think of as scientific experiments," explains Jahner, "but they're a category of text in the Middle Ages that were called experimenta, and they could be anything from medical recipes to recipes for making book ink and paint and parchment, or interesting things you can do with magnets to impress your friends, or magic tricks to do with mirrors. It's this huge category, and it shows up in a number of important manuscripts that we look at for literature. Actually, The Book of Margery Kempe is a great example. There's a recipe copied on the final leaf of the manuscript—a medicinal meant to help with ‘flux,' or dysentery—that scholars speculate might have been placed there as reference to some of Kempe's own ailments."

Jahner and Windham plan to visit the Special Collections at the UCLA Library to look at manuscripts from the period that Windham has been exploring. "Nothing replaces the experience of actually being in the presence of a 700- or 800-year-old book," says Jahner.

The SURF experience has been clarifying for Windham, who returned to college after an almost 10-year gap. When she first went back to school at PCC, her goal was to work in a public library. "But then, as I went through the library program," she says, "I realized I'd rather be in an academic library. And now this experience! I've been so fascinated with medieval studies. This has definitely helped me shape the direction that I want to move in and opened my eyes to a whole other world of how books came to be and even how the English language evolved."